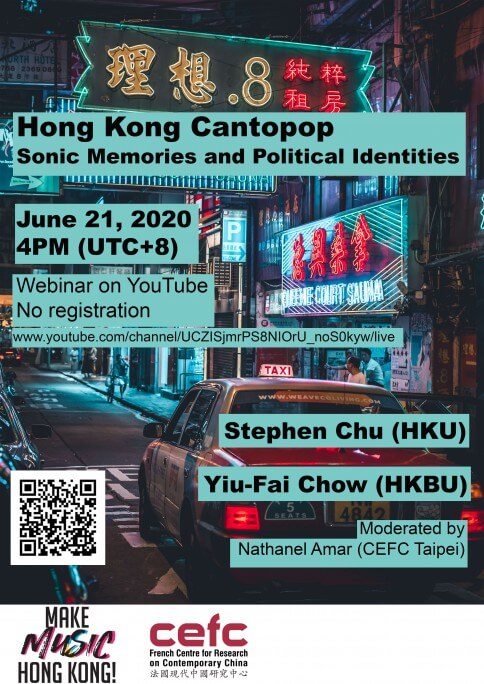 From a marginalized music genre in the 1970s, Cantopop – pop music sang in Cantonese – became Hong Kong dominant cultural product in the 1980s, before slowly declining since the 1990s. In 1997, the year of the handover, Cantopop was confronted both to a crisis of identity and to the growing popularity of Mandapop originating from China and Taiwan. Cantopop has, since its beginning, followed closely the ups and downs of Hong Kong society, reflecting in songs the different political and economic crisis faced by its inhabitants. Besides being an object of nostalgic discourse, Cantopop has been used and re-appropriated by young hongkongese in the wake of recent social movements – from the 2014 Umbrella movement to the 2019 Anti-ELAB protests.


Stephen Y. W. Chu received his PhD in Comparative Literature from The Chinese University of Hong Kong in 1993. He worked for twenty years in the Department of Chinese and Humanities Programme of Hong Kong Baptist University. He was the founding Head of the Department of Humanities and Creative Writing of the Hong Kong Studies Programme. Prof. Chu has published more than twenty books, including the most recent Found in Transition: Hong Kong studies in the Age of China (2018), and Hong Kong Cantopop: A Concise History (2017).

Chow Yiu Fai received his PhD degree at the Amsterdam School of Communication Research, University of Amsterdam. Currently an Associate Professor at the Department of Humanities and Creative Writing of Hong Kong Baptist University, Chow’s research fields include gender and sexuality, creative practices and cultural studies at large. His co-authored book Sonic Multiplicities: Hong Kong Pop and the Global Circulation of Sound and Image (Intellect) is also available in Chinese. Next to his academic work,, Chow is also an award winning writer. He released his first lyrics in 1989. Since then he has penned some 1,000 lyrical works for a diversity of pop artists in Hong Kong, Taiwan and mainland China. In addition to many lyrics awards, Chow’s prose work A Long, Long Farewell won the Recommendation Prize of the biennale Hong Kong Literary Awards (Essays). Lately, Chow has been increasingly involved in multi-media and visual art projects.